As promised, here is a teaser from Chapter Three of "Iniquity and Retribution:"

"Millicent was speechless. She did not know how to respond to what seemed to be a potential romantic approach from a man of marriageable age. Because she had demurred the attention of other possible suitors in the past, and especially while she was away at college, she was inadequately prepared for the sudden and very forthright approach from Edward Smith. She simply looked at him, devoid of all expression on her face."

For both of my books, I am reducing the cost of printed copies to $14.99. This still includes a Matchbook e-reader copy free with paperback purchase.  Watch for the price drop to take effect in the next day or so.


An excerpt from Chapter One, "Iniquity and Retribution":

"In reality, the basement of most houses was a scary place. In this house, the coal-fired furnace had ductwork leading everywhere and resembled a mad octopus. When the burner was fired, the front intake grate glowed with an almost sinister grin. The floor was packed with high silicate sand and it sometimes smelled like it had been used for a toilet more than once to avoid a trip to the outhouse on a cold winter night, before the house was fitted with running water and a flush toilet."


"Edward’s memory of that night started with his mother’s phone calls to his Uncle James and their then-neighbor, Nancy Gibson. In both of those calls, Edward distinctly remembered his mother telling them that she had shot her husband. Even so, Edward tried to recall other memories from that night. He wanted the anger he felt towards his mother to go away. He wanted to be able to love her like a good son should. He wanted Harold Arkwright to disappear and for his father to come back."

Watch this  space for excerpts from each chapter as Book Three of the Lineage Series takes shape over the next few months.

For Amazon Prime Days, I reduced the price of my e-books to $5.99. This price will remain as the e-reader price for my two current books. They are both eligible for Kindle Unlimited subscribers to download. As Matchbooks, the Kindle version is free with the purchase of the paperback version.
Posted by lineage-author at 7:47 PM No comments:

There is more than one Michael Hurd publishing books on Amazon...  I would ideally like to change my entire presence to "Michael Paul Hurd" to avoid confusion with the other contemporary "Michael Hurd" authors. One has written a number of books about sports. There's another one (a Ph. D.) with books on therapy, and yet a third who has written books on choral music.

HOWEVER... it's not as easy to change as it would seem. I can certainly change the authorship on future books and even changing it on past books is do-able. Alas, Amazon will not let me change my author name to anything other than what I originally registered without starting all over again.

My "brand identification" will have to be through the "Lineage" series itself.

Posted by lineage-author at 8:41 AM No comments: 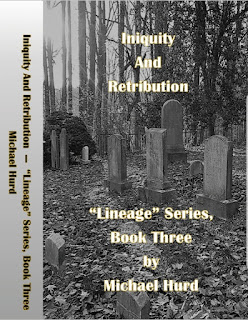 Of course, it could change before publication...


Posted by lineage-author at 5:20 PM No comments:

No, there aren't any spoilers here... but I will say that Book Three, Iniquity and Retribition, will be a radical departure from the historical sequencing in Books One and Two.

Book Three starts in the 1890's, following the "unsolved" murder of Emil Smith (Book One, Chapter One). I say "unsolved" because the investigators of the time focused on who they believed the perpetrators to be, rather than investigating the realms of possibility that did not involve Ophelia Smith and Franklin Emery.

The REAL killer, Edward Smith, eventually grows up... and let's just say that the book will take a macabre' turn as his character is further developed through the narrative.

For those who can't wait for the next volume to be published, be patient. The research into the forensics of the late 19th and early 20th Centuries is taking a considerable amount of time.

Regardless, while you are waiting for Book Three (anticipated publication in October, 2019), please read the other two books!

Posted by lineage-author at 9:24 AM No comments:

First Two Books Are Out There...

So... here I am after writing two full-length books. Not a lot of energy left for blogging about the experience, but one thing I will say is that one of the most satisfying things I have experienced is hitting the <PUBLISH> button on Amazon's Kindle Direct Publishing. I do know that the process can be time-consuming, especially if you want to publish in paperback. Anyway, my books are listed with Amazon and available for purchase ( https://amazon.com/author/hurdm )

If you are a student of genealogy and history, my books are efforts to lay my family tree against events in history -- as if the family members actually participated in the historical situation. I chose only those events where there was a connection to the family. Once I established those connections, I had to dig deep to determine the social climates of each period, the family dynamics, and even the applicable gender roles. Of course, I took some liberties with names and places -- as I did not want even a casual researcher to be able to identify the specific family member or location. Some of my relatives who have read the book have figured things out, but I did not spoon-feed them with the details.

Book Three was already a concept before Book Two was finished, thanks to some input from a cousin that I have not even met. That cousin is the last survivor of his generation that has hands-on experience with some of the events portrayed in that book.

As I work through writing more volumes in the "Lineage" series, I welcome open and frank discussion about the books and encourage your feedback on Amazon. One thing I will not tolerate in my discussions is hateful commentary or irrational arguments.


Posted by lineage-author at 8:33 PM No comments: